Robert L. Hughes from Asheville, North Carolina recently gave the University Archives a drum major’s mace that was among the things his father, Ralph Edwards Hughes, kept from his time at Virginia Tech (then commonly called Virginia Polytechnic Institute or V.P.I.). Ralph Hughes, an Electrical Engineering major, was from Ore Bank (now Arvonia), Virginia. Robert Hughes explained that the mace actually belonged to his father’s roommate and close, lifetime friend, Sherman Edmond Seelinger, who was a cheer leader. Both Hughes and Seelinger, an Animal Husbandry major, graduated in 1921.

The mace appears to be made of wood, with a hand-turned top and four Chicago maroon and burnt orange ribbons wrapped around the shaft making diamond-shaped pattern . It is about three feet long and was probably handmade.

The cartoon on Seelinger’s senior Bugle page indicates how important being a cheer leader was to him. Known for his pep, he took a very active part in the promotion of school spirit and in the advancement of athletics and other college activities. He was a member of the Athletic Council and Monogram Club, and he served as manager of the baseball team. According to the 1921 Bugle, “Manager Seelinger has arranged one of the best schedules ever attempted by any Tech team, and we wish to congratulate him upon his efforts.” W. L. “Monk” Younger coached the baseball team and was assistant coach for the football team.

Seelinger had a reputation for being the best dancer in the school. He served as Leader of the Cotillion Club. The opening figure on both nights of the Cotillion Club’s 1921 Easter set of dances was led by Cadet Seelinger dancing with Miss Geneva Edmundson of Radford. The dances were held at the Field House, which was decorated with a large green and yellow interwoven canopy suspended over the center of the floor, from which was strung alternating green and yellow streamers reaching out to the pillars at the sides of the hall. The All Star Six, of Altoona, Pennsylvania provided the music.

The university has a lot of ways to identify itself quickly: a university shield and seal, a university logo and athletic logo, a motto (Ut Prosim, “That I May Serve”), a tagline (“Invent the Future”), and many other icons that signify who we are. But these have all changed over the years, along with the official school name and nicknames. I’d like to share with you just some of the items from the University Archives, which show the different depictions of our shield, seal, and logos.

From our founding in 1872 until March 1896, the university was called Virginia Agricultural and Mechanical College. Below are two photos of students in athletic gear with sweaters that use different versions of the VAMC initials, one with a large V and AMC surrounding it and one with a large C and VAM inside of it.

The VAMC seal below has symbols for the university, some that continue into the current Virginia Tech seal. The VAMC seal depicts a ribbon with the name; above is the “lamp of learning,” a common symbol for an institution of higher education, sitting atop two books; and below are two quill pens. Within the ribbon are several objects, including a bail of hay, a cotton plant, surveying instruments, rifle with bayonet, a book, a wheel, and a plow.

In March 1896, the university’s name changed to Virginia Agricultural and Mechanical College and Polytechnic Institute, which was often shortened to Virginia Polytechnic Institute or V.P.I. (In 1944, this shortened form became the school’s official name.) At the same time, President John M. McBride and his son decided to develop a motto (Ut Prosim), a coat of arms, and a new seal, which includes the motto and coat of arms. 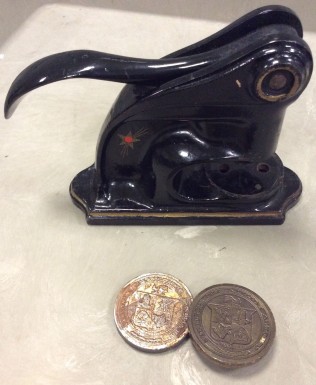 Below are other versions of the university seal and the VPI initials from this time period, on just a few objects and art pieces we have in Special Collections. The VPI initials on several objects below are all intertwined, while an earlier photo shows students in athletic outfits with a large V with a small P inside.

Interesting to note is the different versions of the representation of Virtus in the first quadrant of the seal. Officially, the Virtus of the Virginia seal should be an Amazon woman and the victim a Roman-style emperor, but several versions of the university seal depicted Virtus as a man. In the painting below, Virtus is a knight. Unfortunately, in the early 1960s, someone drew Virtus and the defeated person as a caricature of a cowboy or early white settler defeating an American Indian, possibly because of the Draper’s Meadow massacre in Blacksburg’s early history. It was not used in many places, and it certainly wasn’t used long, as the Board of Visitors in 1963 officially adopted the university seal using the Amazon portrayal from the Virginia seal.

Button with VPI initials and locket with VPI seal 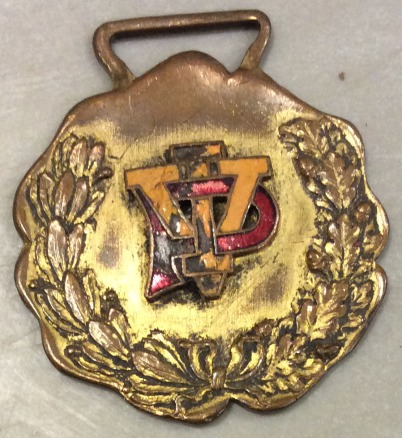 Students wearing VP (no I) logo on athletic uniforms

In 1970, the university’s name changed one final time to our current title, Virginia Polytechnic Institute and State University, shortened often to Virginia Tech or VT. The seal has remained the same, except with the full new name surrounding the coat of arms, lamp of learning, and motto, but new logos have been developed. In 1991, the university adopted the logo of a shield with the War Memorial pylons and 1872 founding year, and in 2006, the “Invent the Future” tagline was added, which is sometimes incorporated into the school logo. An athletic logo of a V with a T inside was adopted in 1957, much like the VP on the students above, and in 1984, two art students, Lisa Eichler and Chris Craft, won a competition to create the current athletic logo with a V and T connected. 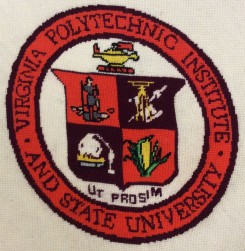 Needlework of the Virginia Tech seal

Buttons with the university logo and athletic logo

If you’re interested in learning more about university logos, seals, and other traditional university symbols, such as the HokieBird and the word Hokie, I suggest looking at some of these additional sources, as well as coming in to Special Collections, of course!

Virginia Polytechnic Institute and State University is, geographically speaking, a large entity. We have campuses in multiple locations, research centers throughout the state, and Virginia Cooperative Extension (which includes 107 county and city offices, 11 agricultural research and Extension centers, and six 4-H educational centers). Here in Blacksburg, there are more than 135 buildings, an airport, acres of land, and a LOT of people. But, of course, it didn’t always used to be this way. In 1872, Virginia Agricultural and Mechanical College started with one building (the former Preston and Olin Institute) and around 250 acres of land purchased from “Solitude” owner, Robert Taylor Preston. By March of 1915, a little over 100 years ago, Virginia Agricultural and Mechanical College and Polytechnic Institute had grown…

By then, it had 5 dormitories, 2 generic “academic” buildings and several identified academic buildings (Mining Hall, Science Hall, and Agricultural Hall), a library, a mess hall, machine and wood shops, a hot house, an administration building, a field house/track, and several utility buildings. This map, however, is also dotted with 19 private residences of faculty members, employees, and administrators. [Joseph Eggleston, then president of the university, lived in the Grove, which was completed in 1902, but it doesn’t appear on this map. It would be just off the south/south-east edge.] Most of these houses were on either side of the current Drillfield and this area was called “faculty row.”

If you look at this map in the modern age, some things may seem a little familiar: the old dormitory buildings are pretty much in the same location as the current Upper Quad (which has some neat history of its own); the current library building is on the site of the old one (#35 on the map); and the Agricultural Hall is the approximate site of the current Ag Quad. At the same time, there have certainly been some major changes: “Faculty row” houses have been replaced by academic buildings on one side of the Drillfield and dorms on the other; Miles Field is gone, replaced by a much larger athletics region a little further out; and the old Infirmary (#34) would be somewhere under Squires today. It’s all a matter of give and take over time, as our campus has continued to make way for what’s new.

Given the change of the last 100 years (and in the 43 years before that), it’s hard not to ask: What will happen in the next 100 years at Virginia Tech? Whatever happens, it’s bound to be exciting!