Author Lucy Herndon Crockett wasn’t born in Southwest Virginia, but that doesn’t mean we can’t add her to the list of American writers with ties to the area. She moved to Seven Mile Ford (Smyth County), Virginia, later in her life in 1947, and worked on several books and manuscripts there. Born in Hawaii in 1914, she travelled as a speech writer and secretary for the chairman of the American Red Cross, and served as a Red Cross worker in World War II, spending time in the South Pacific and Asia. This time abroad was a strong influence the books she wrote during and after the war. Crockett was also an illustrator, creating drawings for her books and the books of others. One of her first publications, from the 1930s, was actually a short booklet on decoupage and decoration. Her interests were as varied as her subjects.

The gallery below includes images items in Special Collections, including an inscribed edition of Pong Choolie, You Rascal–! and typescripts with Crockett’s edits to published and unpublished manuscripts. 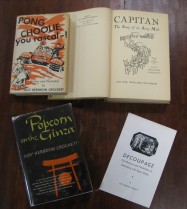 Inscribed inside cover of Pong Choolie, You Rascal–! in Special Collections 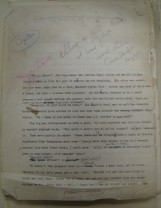 First page of manuscript for Bus Station Blues, Lucy Herndon Crockett Papers (Ms2011-032)
During her career, Crockett wrote 11 books and illustrated many more. Since 2011, Special Collections has acquired copies of all of her authored works (see the list below), though a few are still in cataloging. They should be available soon. Crockett’s audience varied. Lucio and His Nuong and That Mario are related books (Lucio and Mario are brothers) written for children and younger adults. Popcorn on the Ginzo, Teru, and The Magnificent Bastards reflect her experiences living in Asia after World War II, as well as her other later works, were for adult readers.
Bibliography
c.1930s?- Decoupage: The Pleasures and Perplexities of Decorating with Paper Motifs
1939- Lucio and His Nuong: A Tale of the Philippine Islands
1940- Capitan: The Story of an Army Mule
1941- That Mario
1949- Popcorn on the Ginzo: An Informal Portrait of Postwar Japan
1950- Teru: A Tale of Yokohama
1953- The Magnificent Bastards (Later made into a movie- The Proud and Profane)
1957- Kings Without Castles
1960- The Year Something Almost Happened in Pinoso
1963- Pong Choolie You Rascal!
Unpublished manuscript, dated 1972- “Bus Station Blues”
You can read more about the collection and Lucy Herndon Crockett in the finding aid online. You can also visit us to see more of the collection. There are many authors with connections to our area, and Crockett isn’t the only about whom we have papers and manuscripts–we’ve recently acquired materials by and about Sherwood Anderson, for example. However, Crockett is a lesser-known name in many circles. By preserving and providing access to these papers, we can offer a little insight into her creative experience, and hopefully, introduce her to a new audience in a new century.

Coincidentally, I found mention of “the first SF I ever read” in a few places this year. The authors all happened to be about the same age, and all reading Gernsback publications with memorable Frank Paul covers. Paul, the primary illustrator of the first dedicated American SF magazine, is well known for his archetypal depiction of the alien machines from War of the Worlds. But the monolithic impression he made on Arthur C. Clarke is not so widely appreciated!

“The very first science-fiction magazine I ever saw had a cover by Frank Paul – and it is one of the most remarkable illustrations in the history of science fiction, as it appears to be a clear example of precognition on the part of the artist! I must have seen Amazing Stories for November 1928 about a year after it had been shipped across to England- so rumor has it, as ship’s “ballast”- and sold at Woolworth’s for 3p. How I used to haunt that once-famous store during my lunch hour, in search of issues of Amazing, Wonder, and Astounding, buried like jewels in the junk-pile of detective and western pulps! – Korshak, ed. From the Pen of Paul (Orlando: Shasta-Phoenix, 2009): 9.

“The name of the game that year was the Great Depression, but I didn’t know I was playing it. And at some point in that year of 1930 I came across a magazine named Science Wonder Stories Quarterly, with a picture of a scaly green monster on the cover [unfortunately not in our collection; how did that happen?!]. I opened it up. The irremediable virus entered my veins . . . That first issue of Science Wonder was heaven, but I didn’t realize that the fact that it was a magazine implied that there would be other issues for me to find. When another science fiction magazine came my way, a few months later, it was like Christmas. That was an old copy of the Amazing Stories Annual, provenance unknown. Given two examples, I was at last able to deduce the probability of more, and the general concept of “science-fiction magazines” became part of my life.” – Pohl, The Way the Future Was (New York: Del Rey, 1978): 2, 6. “The Fall 1929 Science Wonder Quarterly has an unusually effective cover by Paul, showing three men in spacesuits, tethered by air lines to a rocket…This, incidentally, was the first science fiction magazine I ever read.” – Del Rey, The World of Science Fiction (New York: Garland, 1980): 50-51.

The world of architecture lost a passionate and opinionated voice when Ada Louise Huxtable, architecture critic for The New York Times (1963-1982) and The Wall Street Journal (1997-), died earlier this month at the age of 91. How opinionated was she? Check out this New Yorker cartoon by Alan Dunn that appeared in 1968. And although the Pulitzer Prize-winner was the first full-time architecture critic at an American newspaper when she started at The New York Times in 1963, she was actually following a tradition of women who wrote about extant architecture.

In the mid-to-late 19th century architecture was a relatively new profession engaged in a public campaign to separate itself from common ‘builders.’ Authors such as Louisa C. Tuthill, Mariana Van Rensselaer, Mary H. Northend, Edith Wharton, and Elsie de Wolfe served as intermediaries between the lay audience (i.e. potential client base) and architects. Though not trained in architecture per se, these women were often from privileged backgrounds that afforded them the highest levels of private education, an early knowledge of art and culture, and the ability to travel – often abroad. They published primarily in general periodicals aimed at the emerging middle class: Century, House and Garden, and American Homes and Gardens, although some such as Van Rensselaer did contribute to the trade publication American Architect and Building News (AABN).

Embracing the 19th-century notion of the cult of domesticity, they served as style dictators endorsing particular aesthetics and architects, and instructing the new glut of middle class homeowners on how to create a domestic sanctuary. Subjects such as the history of architecture and general principles of architecture were also perennial topics during this period.

Their writings did not go unnoticed by the professional architecture establishment. Van Rensselaer was praised by the profession and even had her essay “Client and Architecture” recommended for reprint and distribution at an American Institute of Architects (AIA) meeting (1890). She was made an honorary member of the AIA that same year. The tables could quickly turn, however, as they did in 1892 when the AABN panned Van Rensselaer’s book English Cathedrals saying that it “smacks of the magazine and so, almost …of the literary hack.”

The entry of women into an architecture practice that did not center around the domestic sphere would be a gradual one that would eventually make way for renowned critics such as Huxtable and Pritzker-winning starchitects.

Want to know more about women in architecture? Special Collections is home to the International Archive of Women in Architecture. Visit the IAWA page or come see us in person!

**The historical research for this post was culled from Lisa Koenigsberg’s book “Professionalizing domesticity: a tradition of American women writers on architecture, 1848-1913.” and her essay ‘Mariana Van Rensselaer: An architecture critic in context’ published in “Architecture a place for women.” **