In the early years of the Great Depression, a team of 15 men and women visited the homes of more than 300 families in Grayson County, Virginia to ask residents dozens of questions—some rather personal—about their homes, their farms, and their lives. The questions solicited data for a survey conducted by the Virginia Agricultural Experiment Station and the U. S. Dept. of Agriculture’s Bureau of Home Economics. Conducted over the course of nine weeks in Grayson County’s Elk Creek and Wilson Creek districts, the survey formed part of a larger study of social and economic conditions in the southern Appalachian highlands. The resulting report was to “form the basis for the development of effective and much needed home extension work as well as furnish valuable information of use to the departments of education, public health, the state traveling library, and other agencies …” (Annual Report of the Virginia Polytechnic Institute Agricultural Experiment Station, 1931). The collected data was later used in Faith M. Williams’ 1935 report, “Variations in Farm-Family Living” (in United States Dept. of Agriculture Miscellaneous Publication 205, “Economic and Social Problems and Conditions of the Southern Appalachian Highlands,” available online here.)

Here in Special Collections, the original survey records may be found in the Virginia Agricultural Experiment Station Farm Family Study (Grayson County) (Ms1940-023). Nearly 90 years after the survey’s completion, the responses generated by it remain a rich source of raw, granular data for a sizable chunk of Grayson County’s rural population at that time. Comprising a painstakingly meticulous record of a community in the southern Appalachian highlands, the survey data could today be used in examining any number of social, economic, agricultural, or other trends.

Today, however, we’re going to look at the collection from a different angle. For Grayson County local and family historians, the survey responses can provide an unintended wealth of information. Here in a single place are detailed records of 300 of the county’s families, providing data on their employment, income, education—even how many pairs of underwear they made or purchased in a year. As an example, I’ve chosen a single family at random to see what the survey can tell us about them. All of the information that follows is derived from the survey itself, with no outside sources consulted:

On June 29, 1931, surveyors T. M. Dean and Amelia H. Fuller visited the Birkett F. and Ruth Sutherland Taylor family of the Comers Rock area in Grayson County’s Elk Creek District. The Taylors were asked to provide information for the 12-month period ending on March 31, 1931. Given the number of questions asked, the visit must have taken the greater part of the couple’s day.

Birkett Taylor, 42 at the time of the study, was the son of Freel and Bell Harrington Taylor. Ruth Sutherland Taylor, his 38-year-old wife, was the daughter of Alex and Eliza Comer Sutherland. Both Birkett and Ruth were natives of Grayson County, as were their parents. Birkett had attended four years of high school, while Ruth had attended 14 years of school, averaging 16 weeks per year.

Birkett and Ruth had been married for 19 years and were distantly related by blood, being fourth cousins. The Taylors had a rather large family, with four daughters (ages 17, 10, 3 years, and 13 months) and five sons (ages 19, 15, 13, eight, and five). Also living in the household was Birkett’s 62-year-old mother. The family had no boarders or hired help living with them. (They seem to have had frequent guests, however, having provided an estimated 416 meals to guests during the year.)

The Taylors’ two-story, 1500-square-foot frame house had been built in 1881 and was remodeled in 1901. Valued at $2,222, the mortgaged home had a sound metal roof and a single-layer, unfinished floor. Stretching across the full front of the home was a porch, seven feet deep; a smaller, 30 x 7-foot porch was attached to the back of the house. The weathered home had 12 rooms including a kitchen, dining room, and parlor. Birkett and Ruth shared their bedroom with three of their children. Four sons shared another bedroom, and two daughters were in a third. Birkett’s mother, Bell Taylor, had use of the fourth bedroom. The surveyors gave the home a poor rating in terms of cleanliness and neatness. Surrounding the house was a picket fence in poor condition. The yard included shade trees, rosebushes, peonies, and lilies. Nearby were the family’s cellar and a vented privy. The home sat on The Taylors’ 210-acre farm, with 102 acres in pasture and another 55 acres devoted to crops.

In addition to two fireplaces, the house was heated by a woodstove and a coal stove. The family cooked on a woodstove, and the home was lit with kerosene lamps. (The Taylors had spent $50 on 50 cords of wood during the previous year and a dollar on five gallons of kerosene.) A handpump at the sink drew clean water from a spring 500 yards from the house. For bathing, the Taylors used one of two galvanized washtubs in the home, and the family had a gasoline-powered washing machine for laundry. Clothing was pressed with one of three stove-heated irons owned by the family.

The Taylor home was furnished with 15 straightback chairs, five rocking chairs, five tables (in addition to any tables in the kitchen), and a desk. For bedding, the family had five feather ticks, nine straw ticks, and two mattresses. The Taylors also owned three clocks, a piano, a foot-powered sewing machine, and a radio (purchased within the previous year for $30).

There had been no deaths in the Taylors’ immediate family during the previous year. Reporting on serious illnesses in the family, Birkett mentioned that he’d had pneumonia, as had the couple’s 15-year-old son. Ruth reported having had a baby. During the previous year, the Taylors had spent $20 on dental work and $75 for medical services, and they had received free vaccinations.

The Taylors were members of a church and had tithed a total of $10 during the year. They’d paid $4 in income tax and $4 in poll taxes. Other expenses included $2 on cosmetics, $2.60 on toiletries and barber visits, $13 on tobacco, and $3.60 on photography. The family had spent nothing on gifts throughout the year, except at Christmas, when two dollars’ worth of food gifts were distributed within the family. Other Christmas food gifts—valued at five dollars—were given from what the family had themselves produced during the year. No gifts were given outside the immediate family. For the year, total expenditures on recreation and leisure amounted to $42.60.

In addition to farming, Birkett Taylor worked as a miller and carpenter. He earned little as a carpenter during the year (just $50) but made another $410 in lumber and in another unspecified business. The two eldest Taylor boys, meanwhile, had brought in another $100 by working on local roads. The boys earned an additional $284 in hauling, and three of the boys sold some of the rabbits they’d killed, for $7.20. The Taylors’ daughters had not worked outside the home but sold some of the nuts that they’d gathered, for $7.80. The family’s total income for the previous year totaled $1093.00.

The Taylors made most of their own clothing. For the year, they reported spending $46.87 for clothing or materials on female members of the family; $188.65 on the males. Many of these items were purchased at Long Gap, in Wytheville, or through mail-order catalogs, these being cheaper alternatives to the store in Comers Rock.

In the interest of brevity, I’ve omitted here much of what the survey tells us about the Taylors. Other survey responses reveal, in detail, the number of times each family member journeyed away from home and for what purpose, the quantity and cost of each article of clothing spent on each family member, the number of pillowcases and screens in the home, which newspapers and magazines were read by the family, and, well—the list just goes on and on. No less interesting is what the survey tells us about what the family didn’t have. For example, one blank response tells us that the Taylors, like many of their neighbors, didn’t own a car. Other blank table cells tell us which crops the family didn’t raise, which products they didn’t purchase from the store, which types of plants weren’t in their yard, etc.

The image of the Taylors that emerges from the survey is remarkably detailed. Without using a single photo or a word of narrative, the survey responses give us a portrait of one southwestern Virginia family,  based entirely on objective data provided by the family itself and the observations of the surveyors.

I should perhaps note here that the data is not easily retrievable. The survey records contain hundreds of individuals sheets divided among several volumes, each volume comprised of several sets of questions, all arranged first by question, then by record number, not by family name. Nor is the survey infallible. (In seeking more information on the Taylors, for example, I found this page on findagrave, which revealed that Mr. Taylor’s name was “Birket” rather than “Birkett.”)

Despite the cumbersome arrangement of the records, they would prove an invaluable tool for any genealogist or local historian who’s looking for information on an area family and is willing to undertake a little digging. Moreover, the survey continues to hold inestimable value for its original, intended use. Extending this gleaning exercise over the entire survey, an interested researcher could develop any number of projects from the meticulous records created by 15 workers during that summer of 1931.

More on the Virginia Agricultural Experiment Station Farm Family Study (Ms1940-023) may be found in the collection’s finding aid.

I’m posting on both Special Collections blogs this week, so I’m all about food! On this blog, we’re looking at the intersection of agriculture experiment stations, recipes, and meal planning. And a work by a man named George Washington Carver. (If you want to see the latest History of Food and Drink post about sandwiches, you can view it here. Either way, you’re going to hear about peanut butter. 🙂 ) Here’s a bit of Three Delicous Meals Every Day for the Farmer from 1916. (And no, that’s not a typo–“Delicous” is how it appears on the title page and throughout the text.) 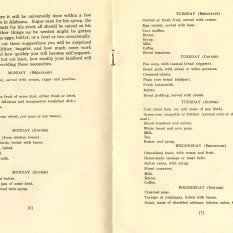 George Washington Carver served as the director of the Tuskegee Institute’s Agriculture Department from 1896 until the time of his death in 1947. During his tenure, he published numerous bulletins, including this one. Three Delicous Meals Every Day for the Farmer begins with an introduction about the relationship between people and food, including what he saw as some of the issues of the time. The majority of the provides a plan of three meals a day for one week.

What grabbed my attention was the “Explanatory” section at the end, which includes recipes for eight dishes that are among the planned menu. There is a focus on simplicity, economy, and (re)use. “Granulated Toast” is basically breadcrumbs which can be used in a number of other ways and in other recipes. “Bacon Puffs” are made from a piece of the bacon that’s already been used at least once. Carver’s recipe for “Nut Sandwiches” means using whatever kind of nut or nuts you have available, peanut or otherwise. These are easy, satisfying, sustainable (if a bit repetitive) dishes meant to appear over and over again in meal plans and they require (mainly) ingredients that were available on the farm.