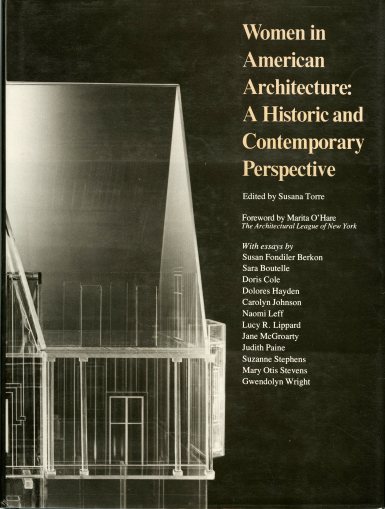 Where Are the Women Architects?, Despina Stratigakos

Forty years ago the book Women in American Architecture: A Historic and Contemporary Perspective took shape under the editorial hand of Susana Torre. While the work arose out of an exhibition meant to expose the undervalued contributions of women to the built environment, it evolved into a discursive response to a series of dogged and complex questions concerning the roles of women in society, the exclusions of educational and professional culture, and the ideological underpinnings of “tradition.” (Torre’s papers are held by the International Archive of Women in Architecture here at Virginia Tech and the collection contains a wealth of research material related to her work on this exhibition and book project.)

Yet after two-fifths of a century have passed, a few questions linger: Have women made appreciable gains within the profession? Did Women in American Architecture’s 1977 publication herald a sea change in the attitudes of practitioners and architectural culture writ large? The answer may effectively be found in a book published just last year called Where Are the Women Architects? by Despina Stratigakos: while significant advances have been made, yes, equity (in pay, recognition, representation, etc.) has yet to be achieved. Indeed, in an interview with The Architectural League just four years ago, Torre commented that she had hoped sexism in the field would have become an artifact of the past: “I would have hoped that by now this topic would have become entirely passe…that it would be a quaint reminder of another time.”

In certain respects, women are still battling a culture that lionizes the “exceptional one:” a culture that valorizes individualism–the “lone genius”–while erasing female collaboration and one that lauds exceptional women to justify the marginalization of other women architects (paraphrase of Torre’s words). The “lone genius” archetype is partially a product of the narrative structure of many architectural histories (I’m looking at you, monograph). Stratigakos re-examines this emphasis on “stardom” and its underlying assumption “that the best architecture is created by mavericks.” Alongside assumptions that persist in mainstream treatment of architecture, Stratigakos looks at the bare fact that young women still confront woefully high professional attrition rates and a lack of visibility in educational curricula, the analog historical record, in online content, and among online content creators.

Digitization and Representation: Strategies For Winning Over Hearts and Minds?

Part and parcel of rectifying gender imbalance involves the activist approach of “consciousness-raising,” which partially entails the documentation and recovery of a cultural past that is often unrecognized or invalidated in historical works. The IAWA, founded in 1985, was itself borne out of Milka Bliznakov’s frustration that the historical record for architecture remained so lopsided: as many women grew old or died, evidence of their work was quietly being relegated to the ash heap of history. In some ways the digital era has presented new challenges regarding historical incompleteness.

In recent years, the internet has played a profound role in shaping cultural memory and, in some cases, reproducing bias–where ample content can be found and accessed so easily, many people erroneously believe that most information resources have been made available online and, following from this assumption, (mis-)perceive an absence of online content as a positive demonstration of triviality or non-existence. As Ricky Erway and Jennifer Schaffner noted in their digitization report “Shifting Gears,” “in a world where it is increasingly felt that if it’s not online it doesn’t exist, we need to make sure that our users are exposed to the wealth of information in special collections.” The current CLIR grant-funded project to digitize the IAWA’s holdings is underway and one of its express goals is to combat the notion that women architects didn’t exist or didn’t contribute much to the built environment. For those of us working on the project, it’s our belief that the work of changing hearts and minds can begin with something as (seemingly) simple as visibility. Check back in another forty years.

View all posts by jadesnelling2

One thought on “Looking Back, Moving Forward: Addressing Architecture’s “Woman Question” Then and Now”