The Highty-Tighties, Virginia Tech’s very own Corps of Cadets band, has performed for numerous U.S. presidents, including Theodore Roosevelt at an exposition in 1902 and in the pre-inauguration celebrations for Barack Obama’s first term in 2009. They have also gain national recognition through their performances at twelve inaugural parades, starting with Woodrow Wilson’s second inauguration in 1917 and ending with George W. Bush’s second in 2005. The band was also invited to play at William Howard Taft’s inauguration in 1909, which they were unable to attend, according to letters in Pres. Paul B. Barringer’s records, RG 2/6. During the mid-20th century, these parades doubled as band competitions, and the Highty Tighties won first prize three years consecutively in 1953, 1957, and 1961, the last year of the inaugural parade competition. Special Collections has photographs and other items related to the Highty Tighties at a few of the parades in the Historical Photograph Collection.

Highty-Tighties in front of Pres. John F. Kennedy and First Lady Jacqueline Kennedy at the 1961 inauguration 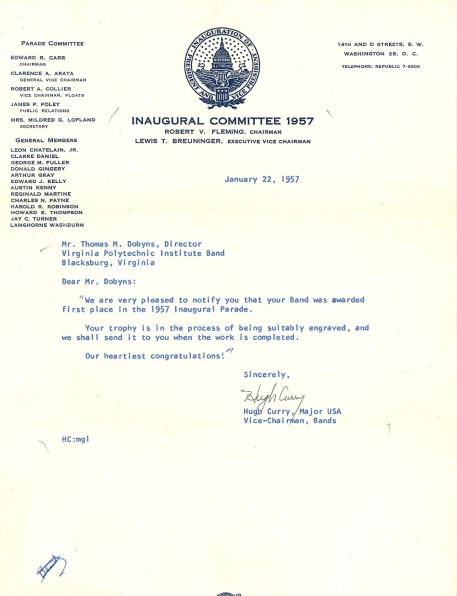 Special Collections also holds invitations to several U.S. presidential inaugurations in our manuscript collections. We also have materials related to the 100th anniversary of Abraham Lincoln’s 1861 inauguration and a tintype from Abraham Lincoln’s 1864 re-election campaign. Below are inaugural invitations and programs for Zachary Taylor in 1849 from the Robert Taylor Preston Papers, Ms1992-003; Franklin D. Roosevelt in 1941 in the John Henry Johnson Scrapbook, Ms2009-053; and Richard M. Nixon in 1969 in the Earl D. Gregory Collection, Ms1972-004.

Here are items from the press packet for the inauguration of Harry S Truman in 1949 in the Evert B. Clark Papers, Ms1989-022:

Being the repository for the University Archives, Special Collections, of course, maintains items related to the inaugurations or installations of the university presidents. For example, we have a video of James D. McComas’ inauguration in 1988 as 13th president of Virginia Tech. Several of the records of the presidents have files related to their inauguration ceremonies, including Walter Newman in RG 2/10, Boxes 2-3; T. Marshall Hahn in RG 2/11, Box 97; and William E. Lavery in RG 2/12, Boxes 1-2. Additionally, items related to the installation ceremonies are located in the Record Group Vertical Files and the University Libraries library catalog. 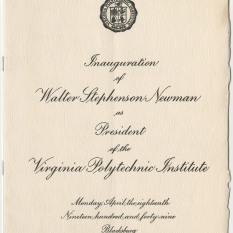 View all posts by lmrvt