Serialization of the 19th Century Novel

In the 1830s, a new trend began in publishing (a “novel” idea, if you will!): Novels started to appear in newsstands. But rather than publishing in a large, cumbersome form that one couldn’t carry easily, they were issued in small, portable, serialized segments. Dickens’ The Pickwick Papers was the first to appear this way in print, but he wouldn’t be the last author to try it (a bit more on that in a moment). For authors AND audiences, this format had a number of advantages. For authors, it meant they could begin to sell a story before it was completed, that they didn’t actually have to have everything plotted out, and they had a little more time to write. For audiences, it meant following a story as it unfolded (rather than waiting for a full novel), a more dramatic reading experience that was drawn out by having to wait, talk with people, and guess, and easier to access the literature of the era. Novels were expensive, but a single serial volume could be purchased for a shilling and passed from person to person. Of course, this does mean the volumes were ephemeral, on cheap paper, and not meant to last. Lucky for us, some of them survived. Special Collections is home to a number of serialized novels, either in complete or mostly complete form.

The first of two we’re sharing today is Charles Dicken’s Bleak House, originally published in 20 parts (though two are combined, so it’s only 19 volumes) between 1952-1953.  (Due to the fragile nature of the publications and the bulky nature of their housing, I had to photograph, rather than scan these items. Apologies for the occasionally blurry quality and/or fingertips!) 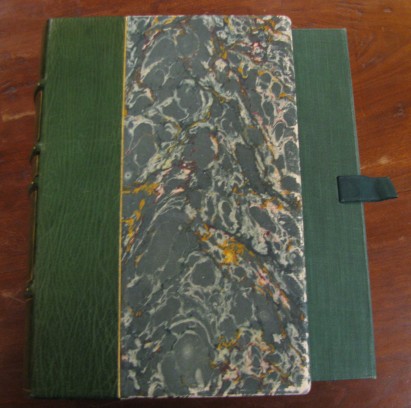 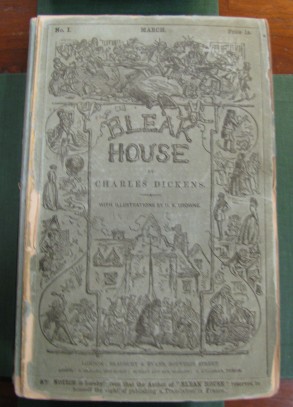 Front cover of volume I.

Advertisements from olume I of Bleak House. Dickens’ volumes in particular featured ads for other Dickens novels, as well as for items you might expect useful in England, like rain coats!

Each volume of Bleak House features two illustrations at the front, like these from volume I

First page of volume I from Bleak House.

The second example is William Thackeray’s The Virginians, published in 24 parts between November 1857 to October 1859. 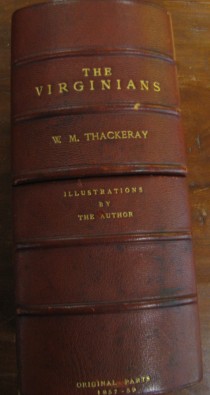 Custom case for Thackeray’s The Virginians.

Case and volumes of The Virginians 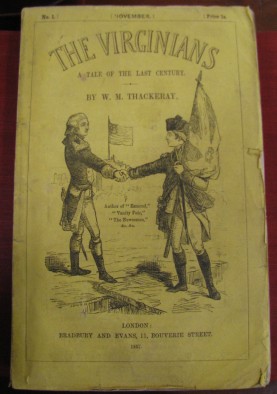 Volume I, with cover illustration, of The Virginians. Thackarey’s novel featured his own illustrations.

Other than the obvious fact that these are different authors and different novels, there’s something else unique about the serialized novel: when a novel was issued independent of another publication (the parts of many serialized novels appears within literary magazines of the time), authors had their own color for a cover. It made new parts stand out on shelves and caught potential readers’ eyes. Dickens’ covers were blue, Thackeray’s were yellow. George Eliot’s covers were green, and from what I’ve found so far, Anthony Trollope’s were brown (at least those from the same publisher). I think I recall another writer having purple covers, but I haven’t been able to come up with who that was. If you know, let me know in the comments!

A little later in the 19th century, another form of the serialized book emerged: the “three-volume” novel (aka the “three-decker” or  my favorite, the “triple-decker”). Longer novels like Henry James’ The Portrait of a Lady or George Eliot’s Mill on the Floss both appeared in this format (we have a copy of the latter in our collection). The triple-decker afforded some of the convenience of the serial in a more condensed form and by the time it was popularized, book-making processes (and consequently book-buying) had become cheaper. On the other hand, both established and new authors of the age began to make their living this way, many of them through sensational, overly-dramatic tropes and as a result, in some literary circles, the triple-decker took a lot of criticism and mockery. As one of Oscar Wilde’s characters remarks in one of my favorite plays, The Importance of Being Ernest, “It [a baby carriage] contained the manuscript of a three-volume novel of more than usually revolting sentimentality.” (Wilde himself published some of his writings in serial format in literary journals of the time, though he didn’t produce any triple-deckers.)

Whether you’re an English major, a literature lover, or just curious about unique formats of books, you’re always welcome to pay us a visit to see our serial sets, three-deckers, and more!

View all posts by archivistkira

One thought on “Serialization of the 19th Century Novel”